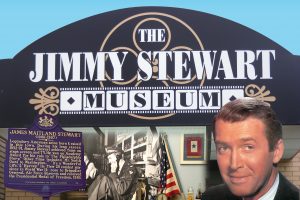 The glitter of one of America's most beloved screen stars shines brightly on Indiana, for it was here that the town's most famous son, Jimmy Stewart, was born. Indiana may have inspired many of the all-American boy roles that earned him international acclaim as an actor, and as a symbol of the best of American heroes. His boyhood was, by all accounts, a typical small-town American idyll, which you can retrace along the same streets, viewing many of the same sights that Mr. Stewart saw before he left Indiana for college and Hollywood, where he became one of the immortals of the silver screen. Today, the most visible sign of his origins in the town is The Jimmy Stewart Museum. The museum highlights its namesake's accomplishments in film, radio, and TV. His roles as military hero, civic, leader, family man and world citizen are also woven into displays, film presentations, and gallery talks. There's even a special room dedicated to his family's long and colorful history in Western Pennsylvania. Everything from a daguerreo-type of his great grand-dad in Civil War uniform to baby photos of Jimmy to his dad's old desk from the family hardware store are all on display. You can view Stewart's film clips and career retrospectives in an intimate, 1930s vintage movie theatre. Plush with navy velvet drapes and wine colored seats, the theatre features the best of the old and new. The state of the art sound and projection system was donated by Universal City Studios of Hollywood. For more information call 1-800-83-JIMMY, or check out the Jimmy Stewart Museum on the World Wide Web at http://www.jimmy.org. The Jimmy Stewart Statue stands on the lawn of the new courthouse, at the corner of 8th and Philadelphia Streets. Jimmy Stewart himself unveiled the statue in 1983 during a festive 75th birthday celebration which included a fly-over of Air Force jets and a telephone call from President Ronald Reagan. Directly across Philadelphia Street from the statue, a sundial marks the former location of J.M. Stewart & Sons Hardware, where young Jimmy worked and proud father Alex later displayed Jimmy's Academy Award statue. One block west on Philadelphia Street, a bronze plaque marks the doorstep which led to the house where Mr. Stewart was born. Travel east on Philadelphia Street, turn left onto Jimmy Stewart Boulevard, and proceed one block to the base of a long set of concrete steps that lead up Vinegar Hill. Jimmy's boyhood home stands at the top of the steps, on the left, and remains a private residence today. As you return down the steps to Jimmy Stewart Boulevard, you are treated to a panoramic view of the town, and the Victorian-era courthouse that was featured, along with a portrait of Mr. Stewart, on the cover of a 1945 Life Magazine commemorating his return to civilian life and acting at the end of World War II. Proceed east on Philadelphia Street, turn right onto South 6th Street and travel two blocks to Wayne Avenue, where the Historical & Genealogical Society of Indiana county maintains a museum collection and library that includes a selection of items pertaining to Mr. Stewart. You may also wish to visit Memorial Park, just beyond the Historical Society. Along with its stately trees and inviting benches, the park includes a Doughboy statue, erected by Alex Stewart to honor the veterans of World War I.